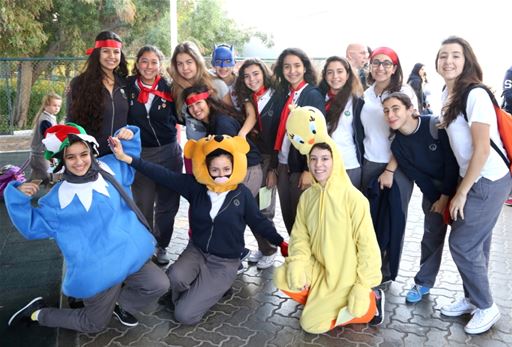 We are proud to announce that Winter Wonderland 2014 was an extremely entertaining event at ISC-Dubai! On December 18, 2014, the SLO held a festival loaded with fun activities for all students to enjoy. It all began on Thursday morning, where the SLO set up a winter- themed tent around which SLO prefects stood wearing Disney costumes and gave out stickers to the all young students who entered the school. Under the tent, students and parents enjoyed HD videos of falling snow as well as a burning fireplace. What a wonderful way to begin their day! Moreover, parents and students enjoyed the Life Vest team’s flash mob on the popular Algerian song “C’est La Vie”. Later on during the primary lunch break, the winter wonderland tent was placed in the center of the primary playground and SLO prefects were able to create a lovely, engaging atmosphere. Primary students had the opportunity to build a snowman made of cotton balls while others tried to stick a carrot nose onto the snowman with a blindfold on their eyes. It was a fun, lively afternoon for all. There was a lot of popcorn, cup corn, and even a cake eating contest for everyone, even for staff members! Last but not least, the junior event was a nice ending to the day with a barbecue, an exciting football game, a delicious cake and burger eating competition, an apple and Nutella game, a lot of dancing and plenty of s’mores! It was truly a day to remember. Happy Holidays Everyone.

The International School of Choueifat — Dubai